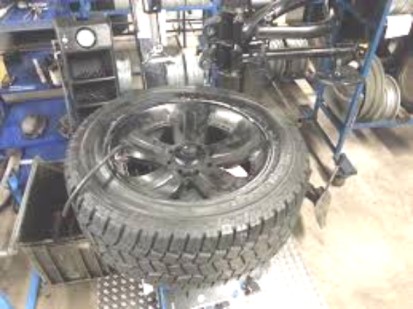 This means that Yokohama M/T performs better off-road because the grooves are wider and the blocks are spaced at greater distances, resulting in a higher void ratio.

Due to its narrow grooves and closely spaced blocks, Cooper AT3 performs well on-road due to its higher contact patch.

Cooper produces very little noise, providing good on-road comfort, while Yokohama is an excellent shock absorber for off-road use. Find out more about the facts and features of both tires by reading on.

As a result of the tread design, Geolandar M/T tires grip effectively off-road because the blocks are spaced at a much larger distance resulting in wider grooves.

Due to the wider grooves, water can easily pass through the tread in the backward direction, preventing hydroplaning on wet roads. Because of the wider grooves and widely spaced blocks, it performs well on mud and snow terrain.

The tire grips firmly on such terrains, throwing mud/snow particles backwards so that it can move forward efficiently.

Due to various large stone ejectors within the wider grooves, it also performs well on rocky terrain. Due to the large empty spaces in this tire, the air particles can easily get trapped and hit back and forth within the grooves, causing more noise.

The Cooper AT3 performs excellently on roads thanks to numerous small blocks closely spaced on the tread, resulting in much narrower grooves that improve grip.

It has poor hydroplaning resistance because the constricted spaces prevent water from passing through the tread easily, and the tire may lose grip on wet roads, resulting in hydroplaning.

Due to the narrow grooves and closely packed blocks, it does not perform well on mud or snow terrain.

As the tire cannot throw the mud/snow backward, it loses grip on such terrain, causing it to slip. On rocky terrain, it performs moderately due to the various stone ejectors within the constricted voids.

As a result of the close arrangement of blocks, there are tiny spaces between them, preventing air particles from getting trapped and hitting; thus, there is very little noise.

Because of the higher void ratio, Geolandar M/T does not provide good on-road traction. Having broader grooves and widely spaced blocks makes it difficult for the tire to maintain good on-road grip.

As a result of the hollow spaces in the tread, the tire maintains good grip in hydroplaning situations and prevents hydroplaning.

As a result of its higher contact patch, AT3 provides excellent on-road traction. In addition to the broader grooves and closely packed blocks, the tire provides a good grip on the road.

Since there is not much space within the blocks for the water to pass through, it causes a loss of grip in these situations, causing hydroplaning.

Because Geolandar M/T grooves are wider and blocks are spaced at a greater distance, it performs well on mud terrain.

Mud particles cannot get trapped in such tread; the wider grooves easily throw them backward. Without any barriers, the tire performs effectively on mud terrain.

Since the grooves within the tightly packed blocks are narrow, AT3 does not perform well on mud terrain because mud particles can get trapped within these grooves. Tires may lose grip in such situations, making them difficult to handle.

M/T works well on snow terrain since the larger voids and arrangement of blocks prevent soft snow particles from being trapped.

Due to the high void ratio, the tire throws snow backward, maintaining a good grip and moving forward effectively.

The arrangement of blocks and grooves isn’t suitable for icy terrain, so it doesn’t work well on ice. The tire’s lower contact patch and fewer sipes make it difficult to handle and lose grip.

AT3 fails to work well on snow terrain because its narrow grooves and overcrowded blocks trap soft snow particles.

Soft snow terrain can cause the tire to lose grip and become slippery, resulting in poor performance. However, such an arrangement of blocks and grooves is excellent for icy terrain, so it performs well on ice.

A higher contact patch and various sipes help the tire maintain its grip on ice, resulting in better traction.

The larger grooves and widely spaced blocks allow Yokohama to perform well on steeper terrain because of their good grip.

Cooper AT3 performs moderately on rocky terrain due to its stone ejectors within the grooves, as well as a decent built standard that protects the tread from stone damage.

Rock/pebble particles can be trapped within the constricted grooves due to smaller stone ejectors and compacted blocks, affecting its performance.

Which Tire Is More Comfortable?

Because of the broader grooves, air particles can easily get trapped, causing more noise as they hit back and forth.

As AT3 is more inflated, it does not absorb shock well on bumpy roads because there are constricted voids within closely spaced blocks, leading to a larger contact patch, so it does not offer much off-road comfort.

In spite of that, it provides excellent on-road comfort because there is little space for air particles to get trapped and strike the groove walls.

High-density triple polymer is used in the tread of Yokohama tires. A Geo-shield structure consists of numerous steel belts, sidewall plies, a high turn-up carcass, and a full nylon cap for additional protection. All sizes are guaranteed to wear uniformly within the first 2/32 inch.

Cooper AT3 uses durable-Tread Technology. For excellent durability and traction, a cut and chip-resistant blend is essential.

Sharp gravel is prevented from being kicked into the tread by stone ejector projections. A treadwear protection warranty covers it for up to 65,000 miles.

As a result of the unique technology and high-quality material used to make the tread rugged, Yokohama’s price is slightly higher than AT3.

Quick Summary of Yokohama Geolandar M/T Vs Cooper AT3

Video Comparison of Yokohama Geolandar M/T Vs Cooper AT3