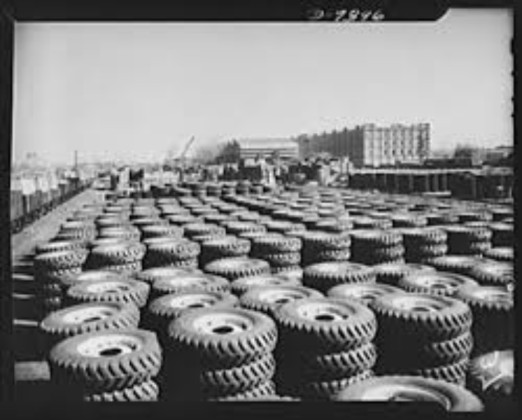 Its higher built strength and durability gave Toyo Open Country all terrain tires an edge over its competitors.

Toyo Open Country AT3 Vs Falken Wildpeak AT Trail

With its wide tread blocks, the Toyo Open Country AT3 has a symmetrical tread pattern with a higher void ratio.

In dry conditions, the tire’s grip is reduced as a result of a smaller contact patch.

Wider grooves and deep sipes, combined with a high void ratio, allow the tire to easily navigate wet surfaces due to their ability to pass water.

For mud passage, it has an open shoulder design with wider grooves between its tread blocks.

However, its lower contact patch prevents a decent grip on icy roads, thus limiting its traction on ice.

A bold stone ejector prevents stones and pebbles from getting stuck in the grooves, allowing good traction.

The higher the tire’s built strength, the more durable and more mileage it can provide.

The wider grooves of the tire trap more air particles, making it loud on the road.

While traveling off-road, these wider grooves provide suspension, dampening the impact of jerks and smoothing the ride.

Having a less aggressive symmetrical design with a lower void ratio, the Falken Wildpeak AT Trail offers decent contact with the road, thus increasing its on-road dry traction.

Due to its narrow grooves and shallow sipes, this tire is not great for wet traction and may cause hydroplaning in severe rainstorms.

In addition, mud and soft snow are not effectively thrown back by the narrow grooves, reducing the credibility of the tire off-road.

As a result of its closed shoulder design with narrow grooves between its tread blocks, mud cannot pass through them, further reducing its mud traction.

Because of its small stone ejectors, this tire isn’t recommended for use on rocks because it cannot keep out stones from its grooves.

Tires with silica tread compounds do not provide much strength, so they are less durable.

A tire’s mud-resistance depends on the width of its grooves.

Tires with wider grooves will perform better on mud since they can efficiently throw the mud backward, causing the tire to move forward.

AT3 performs well on mud because it has wider grooves.

With its open shoulder design, mud can easily pass through its shoulder grooves, enhancing its mud traction.

Consequently, the tire has great mud traction even in heavy mud.

A narrow groove on AT Trail prevents the tire from effectively throwing back mud and keeping it moving. Mud cannot pass through its tread blocks grooves due to its closed shoulder design. When navigating through heavy mud, this can cause the tire to get stuck.

Point to be Note: Falken Wildpeak AT3w is a better choice for off-road than Falken AT Trail.

A wide groove allows soft snow to be thrown backward efficiently, resulting in good grip on snowy roads. As with mud, Toyo Open Country AT3 is superior on soft snow due to its wider grooves.

As a result of its lower contact patch, the tire is less reliable on icy roads due to its inability to grasp ice.

Due to its narrow grooves, Falken AT Trail is unable to move boldly on soft snow, since it is unable to evacuate the soft snow and provide necessary grip.

As a result, its soft snow traction is poor.

The vehicle has good traction on ice due to its higher contact patch, allowing it to move confidently.

Toyo Open Country AT3 has bold stone ejectors that prevent stones and pebbles from getting inside its grooves. Designed to resist trail damages such as cuts and chips, it has a stronger build.

There are smaller stone ejectors on AT Trail, which are not sufficient to prevent all stones from getting stuck inside the grooves and causing damage.

Due to its weak build, this tire is vulnerable to trial damages in rocky terrain.

The narrow grooves are inefficient for gripping gravelly or rocky surfaces at difficult angles of approach.

Due to its high void ratio, AT3 tires have minimal gaps between their tread blocks, resulting in less road contact.

The tire’s grip decreases and its braking distance increases, resulting in overall undesirable dry traction on the road.

The tire performs very well in wet conditions due to its wider grooves and deeper sipes, which effectively wipe away water.

Because AT Trail has a lower void ratio, it allows maximum road contact.

As a result, its grip will increase and its braking distance will decrease.

Toyo AT3 tires have a lower contact patch, which means less force is needed to rotate them.

In order to make the tire stronger, it uses a 2-ply polyester casing reinforced with nylon which serves as a bed for steel belts.

As a result of the stronger build, the treadwear resistance of the tire is further enhanced, resulting in higher durability and miles per gallon.

AT Trail tires have a larger contact patch, which means they require more force to move. As a result, the tire wears out more quickly because of increased rolling resistance.

Due to the lower tire treadwear resistance, the weaker built strength further increases its treadwear.

As a result, the tire is much less durable and has less mileage, putting it at a disadvantage against its rival.

How Can I Find the Most Comfortable Tire?

It is not preferred on-road because it has wider grooves that trap many air particles, causing loud noises as they strike back and forth against the groove walls.

On-road, this makes the journey very uncomfortable, but when traveling off-road, these grooves act as suspension, reducing the impact of shocks, making the journey more comfortable.

Due to its narrow grooves, AT Trail produces only a small amount of noise when traveling at high speeds on-road.

Because they cannot absorb shocks, these narrow grooves do not provide a smooth ride over uneven terrain.

Price Differences of these two tires

The Toyo AT3 is a more expensive tire due to its enhanced performance off-road, better wet traction, higher durability, and higher mileage.

The AT Trail is an on-road tire designed to provide better traction on ice and noise reduction.

The customer must decide on the tire based on his priorities and needs. Both tires are suitable for different kinds of terrains.