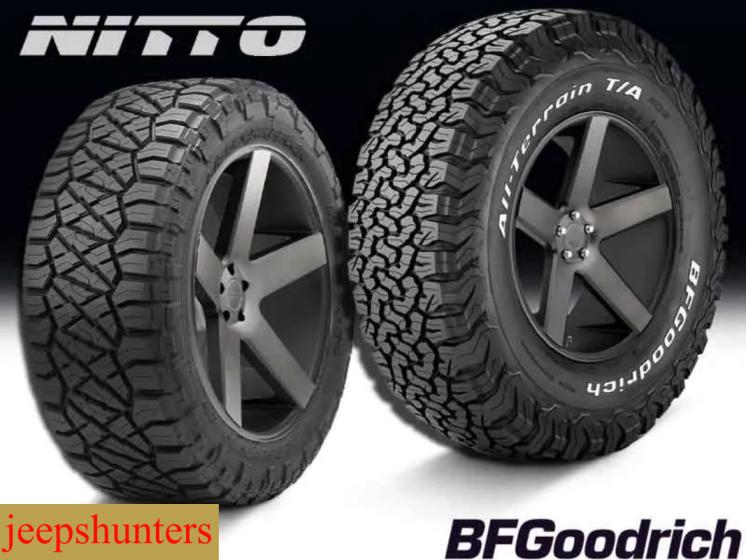 Nitto Ridge Grappler Vs BF Goodrich KO2, Both are the Best. Tires with these properties offer enhanced off-road capabilities as well as reliable traction on paved surfaces. Rugged patterns not only give them an aggressive appearance, but also make them more durable on rough terrain.

The KO2 is an all-terrain tire with an open tread pattern and a specialized rubber composition. It is rated for both M+S and severe snow (3PMSF). As a result of its enhanced tread polymer, it offers better durability, uniform wear, and longer warranties.

The KO2 tire shows an aggressive tread design with C-shaped small blocks arranged in an interlocking manner in the central portion of the tire. The blocks are separated by relatively shallow but wide grooves. They also have multiple sipes on them. This tire has lugs that are irregularly shaped, have wide spacing between them, and They have notches on their internal sides and scooped edges on their margins.

They have rectilinear stone ejectors in their lateral grooves, and small, bumpy triangular ejectors are also present in their longitudinal grooves. Its sidewall is serrated, but it is less aggressive than the contestant.

The Ridge Grappler also has an aggressive look with its big triangular blocks arranged side-by-side, Z-shaped longitudinal grooves, and compactly placed square shoulder lugs. Its grooves are deeper than those of its competitors, but the closer arrangement of blocks makes them less wide and reduces the void ratio of its tread compared to its competitors.

Blocks have reinforced edges and full-depth sipes with slits. Shoulder lugs lack traction notches, but their outer edges are textured. The sidewalls are more aggressive and raised than its competitor. Among shoulders, there are also linear stone ejectors, but they are not as prominent as in its competitor.

Its closely arranged large-sized blocks make the contact patch of the Ridge Grappler comparatively larger, so it provides better on-road grip. The biting ability of the tread is enhanced when more of the tread area is in contact with the road. Similarly, its shoulder lugs account for firm traction when your vehicle turns around a corner. Consequently, its handling on a dry paved surface is better than its competitor.

The KO2 scores less for dry traction because its smaller blocks and wider grooves reduce the contact patch, resulting in reduced grip. Its steering responses are also less efficient than its competitor due to the high void ratio of shoulders as distantly placed shoulder lugs hold on the surface less firmly.

Compared to other tires, the Nitto tire has the best wet traction due to its larger contact patch and deeper tread, which efficiently remove snow, mud, and water from the surface. In terms of handling performance during turns, the compact shoulders of Ridge show better steering control than its competitor.

On the other hand, KO2 has less traction on wet pavement due to its tread having less grip as a result of its smaller contact patch and less deep tread, resulting in reduced hydroplaning resistance. In addition, its shoulder lugs have only minimal contact with the road, reducing its handling efficiency.

The open tread on the KO2 delivers enhanced performance on mud terrain due to its ability to roll through muddy puddles easily. It also carries a M+S (mud and snow performance) rating. The C-shaped blocks bite into muddy surfaces very effectively, while the wide grooves allow mud to drain away.

When you turn your vehicle in mud, its wide lateral grooves and scooping over the shoulder edges remove mud, and its irregular lugs with traction notches ensure a firm grip.

Conversely, Ridge has a deeper tread that makes its evacuation capability quite reliable, yet its closely placed blocks have less biting power on a track covered in loose material. Its compact shoulder design also reduces its handling efficiency. Due to the absence of traction notches and scooped edges, its shoulder lugs are comparatively less effective at biting.

BFGoodrich KO2 has higher scores for snow traction thanks to its multi-edged blocks which efficiently bite through the soft snow and its wide channels, which allow easy removal of snow from the tread. As this tire has a 3PMSF rating, it is approved for winter use.

Nevertheless, its small blocks have trouble maintaining a firm grip on the ice as their contact patches are small, making their ice traction less than the contestant.

Ridge Grappler also performs well in snowy terrain due to its deep tread, although it has lesser traction abilities than the other contender. As a result of the smaller width of its channels, snow evacuation is slower and less efficient.

It also does not have severe snow service ratings. Nevertheless, The fact that these tires have a higher contact patch for grip and deeper tread for slip resistance allows them to show comparatively enhanced traction on ice.

Both tires perform well over rocky trails due to their sturdy construction and effective stone ejection technologies. However, Ridge’s tread has a larger contact patch to grip over slopes due to its larger contact patch. To protect the tread from gravel particles and stones puncturing, it has small stone ejectors in its lateral grooves.

As well, its shoulder lugs are compactly arranged and stepped at the outer edges for enhanced traction on uneven rocky terrain. It also benefits from improved lateral stability with aggressive side walls.

KO2 shows good performance on rocks thanks to its effective stone-ejecting technology and traction notches over the shoulder lugs for extra stability. There are rectilinear stone ejectors in the lateral grooves and small but noticeable triangular ejectors in the longitudinal Z-grooves.

Therefore, its ability to bounce off hard particles is greater. However, less tread surface area and less aggressive sidewalls reduce its overall traction. Having a high void ratio decreases the grip of tread on rigid surfaces, which is why its small blocks have comparatively less biting ability while climbing rocks. And its sidewalls are also less textured, thus, have a lesser ability to keep bombarding fragments from chipping the tread.

Although it is a hybrid tire, Ridge provides more comfortable highway driving because its tread offers more firm on-road traction. However, this tire ranks lower in noise production due to its deeper tread. Its grooves provide a larger void for air to circulate freely and collide with each other, resulting in a louder voice.

KO2 has relatively decreased driving comfort due to its open tread, whose traction on paved surfaces is limited by its smaller contact patch. It is, however, a quieter tire in comparison because, although its grooves are wider, their shallower depth reduces the vacuum available for wind circulation.

The multi-layered tread composition of KO2 tires makes them more durable than their competitors. As a result of the tread’s internal structure, it is built from two sturdy steel belts reinforced with spiral nylon wrapping, three ply polyester cord, and BFGoodrich TriGard compound.

The tread is also composed of single strand beads to provide uniform wear. The consumption of tread against road friction is another factor that contributes to tread life; BFGoodrich tires have the advantage here as well. It shows broad grooves and a smaller area of tread touching the road directly.

Thus, it faces less rolling resistance and wears down more slowly. A manufacturer’s mileage warranty covers its long-lasting performance for up to 50,000 miles. Furthermore, you get the assurance of even wear up to 2/32”.

The Ridge Grappler consists of a Nitto hybrid tread compound reinforced by two belts of high-strength steel, but it contains no specialized enhancements for enhanced durability or wear. In addition, its large blocks arranged in a compact pattern contribute to its high rolling resistance.

As a result, its tread wears faster. Due to these factors, treadwear is unpredictable.so it does not offer any mileage warranty for these tires. Similarly, uniformity and workmanship warranties are shorter.

The Nitto Ridge Grappler is priced higher because it offers comfortable highway driving, as well as optimized performance in rugged terrain, especially on rocks. Prices range from S265 to $320.

For its optimized winter performance and reliable on-road capabilities, KO2 puts relatively less strain on the wallet. It is usually priced between $230 and $270.

KO2 is an all-terrain tire, while Ridge Grappler is a hybrid terrain tire.