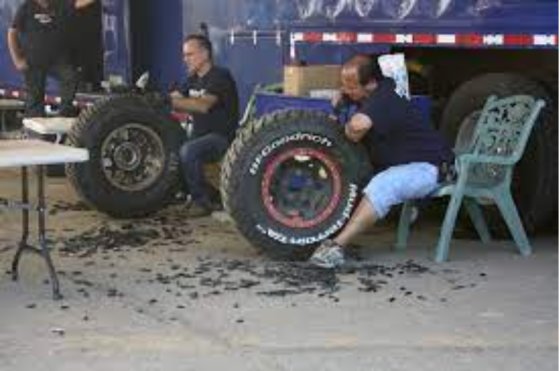 In addition to providing a smooth and comfortable ride on highways, the Cooper A/T3-XLT is capable off-road as well.

The Cooper Rugged Trek, on the other hand, is an aggressive tire that performs well both on and off the road.

Here are some details about these tires.

The Cooper A/T3-XLT performs better on highways and dry roads than the Rugged Trek. Because of its compact tread design with relatively small incisions in its tread, it provides an enormous surface area for gripping the road, resulting in superior on-road traction.

It also has a substantial number of grooves and sipes on the tread block that provide optimum wet traction. In extreme weather conditions, however, these grooves are prone to hydroplaning.

Similarly, the Cooper Rugged Trek is an all-season all-terrain tire, but its tread design is more aggressive and well-suited for off-road use. Having a broader tread design and triangular sipes between the tread blocks, it is more self-cleaning.

As a result, it performs better on wet surfaces and off-road tracks than the A/T3-XLT.

Because of its next-generation silica compound, the Cooper A/T3-XLT offers promising on-road traction in dry conditions.

As a result, it experiences a stronger grip.

Additionally, its wide shoulders enhance its handling on the road.

The A/T3-XLT provides a stable grip on wet surfaces due to its circumferential grooves and omni-directional micro-gauge sipes in the tread blocks that prevent it from hydroplaning.

In extreme weather conditions, however, the grooves are not large enough to prevent hydroplaning.

The Cooper Rugged Trek, on the other hand, is composed of a silica compound that ensures a safe grip.

Compared to the A/T3-XLT, it has a symmetrical tread pattern that imparts less surface area.

Consequently, it sticks to the ground more easily and establishes a lighter grip.

Thus, the Trek doesn’t perform as well on dry surfaces as the A/T3-XLT.

In the domain of wet surfaces, the Trek has larger grooves and larger sipes in its tread design that provide exceptional water evacuating performance.

In wet conditions, the Trek performs better than the A/T3-XLT.

In contrast to the A/T3-XLT, it continues to perform well in extreme weather conditions.

Besides being agile and sturdy, off-road tires must also be flexible and tensile.

A tire’s grooves and sipes determine its performance on most off-road terrains, while a larger footprint is required to ensure competent traction on some terrains.

In addition to its maximized full depth micro gauge sipes and rugged shoulders, the Cooper A/T3-XLT has three narrow but deep circumferential grooves and some lateral grooves in its tread design.

Using these features, the A/T3-XLT can move smoothly and steadily across mud that comes in its way.

Due to its narrow grooves, the A/T3-XLT can’t handle deep mud terrain easily due to its lack of self-cleaning ability.

Alternatively, the Cooper Rugged Trek has even larger grooves in a zig-zag pattern and large scoops and lugs (called the earth digger technology) that allow it to dig into the mud and excavate the mud efficiently to move across it.

As a result of its larger grooves, the Trek can even handle extreme muddy tracks, unlike the A/T3-XLT, due to its significant back-flushing ability.

What was the performance of these tires on snow?

In order for a tire to perform well on snow, it needs a winter rating, which means the tire’s material needs to remain flexible at low temperatures.

The Cooper A/T3-XLT and Trek do not have the compound material to provide high-grade snow traction.

Even so, both of these tires can provide some snow traction.

With narrow grooves and a larger footprint, the Cooper A/T3-XLT performs well on light snow due to its ability to push through it.

However, it cannot handle heavy snow well because the grooves are too narrow.

The bigger footprint makes it stick better on hard snow, making it a better choice for this terrain.

Thus, it has wide and deep grooves that allow it to grab and throw snow in its path to increase its grip.

In spite of that, it has a smaller contact face than the A/T3-XLT, which reduces its traction on hard snow due to decreased rolling resistance.

Traction on rocks and gravel:

Rocks and gravel require tires that are strong, resilient, and robust.

With its strong silica compound, the Cooper A/T3-XLT is capable of withstanding harsh terrains.

The upper sidewall is protected from punctures and cuts by rugged shoulders.

Additionally, the tread blocks are equipped with anti-stone retention technology to prevent damage from stones.

Similar to the A/T3-XLT, the Trek has a rough terrain tread pattern made of a silica compound.

Consequently, it can handle rugged terrain with considerable endurance and durability.

In rough conditions, its deep treads and adaptive sidewall make it more agile, protecting the tire from cuts and chips.

A stone ejecting block further protects the tire against stones and gravel.

The wear-arc technology also promotes even tire wear by keeping the footprint flat on the road.

As a result, the tire is economical and efficient.

With all of these features, the tire is protected from cuts and chips, stone damage, and sidewall abrasions, making it a durable and sturdy tire.

Rugged Trek, on the other hand, is made from an advanced silica compound.

This reduces the rolling resistance of the tire and improves its tread wear and fuel efficiency.

Rugged Trek has deep treads and a high tensile ply body, making it 20% stronger than most of its competitors.

Whether it’s rock cuts or impact damage, this tire can handle anything. As a result, the Trek is more durable than the A/T3-XLT.

However, the A/T3-XLT has better tread-wear than the Rugged Trek.

How Comfortable Are These Tires?

Every person’s primary concern is comfort.

A/T3-XLT tires have a compact tread design, with a large surface area to contact the road surface.

As a result, it is more stable on the ground and more comfortable.

Furthermore, it features whisper grooves in its narrow grooves that trap air within treads and act as a sound barrier to ensure a quiet ride.

Meanwhile, the Trek has a more open tread design with larger grooves than the A/T3-XLT.

In addition to decreasing the tire’s contact zone, resulting in less stability and riding comfort, it also increases noise and vibrations.

Due to its larger grooves, more air is captured, which collides with the gaps of the tire, resulting in higher noise and vibration levels.

Due to its larger grooves, the Trek has a bit higher noise level than the A/T3-XLT thanks to whisper grooves.

This means that the A/T3-XLT is more comfortable than the Trek.