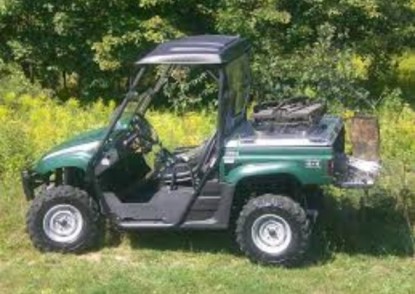 We Find Common Problems With Yamaha Rhino 660. There is no doubt that the Yamaha Rhino 660 has an aggressive look. Rhino is one hell of a workhorse, as its name suggests.

The Rhino 660 is the only 4×4 utility off-road quad like it. The combination of beauty and brawn is impressive.

The vehicle is powered by a four-stroke, single-cylinder, five-valve SOHC engine (660cc). This liquid/oil-cooled engine is paired with a reliable Yamaha Ultramatic® V-Belt automatic transmission to produce decent horsepower.

Yamaha Rhino 660 Problems To Watch Out For:

We have found some common problems with Yamaha Rhino 660 that should be addressed before purchasing.

There may be a major starting issue with the Yamaha Rhino, especially in the older versions. A sudden shut down of the engine is the main sign of this problem.

It will shut down again after a while, and won’t go more than 10 mph during this time.

Only when you neglect the battery for a long period of time can this problem occur. Honestly, this problem may not have been caused by the vehicle, but by a lack of maintenance.

Most of the time, changing the battery fixes this problem.

Problems with the engine

In addition to the Yamaha Rhino 660, most 4×4 off-road utility vehicles suffer from this problem.

However, we haven’t heard of any engine problems with the latest versions of the Yamaha Rhino, such as the 700 Rhino.

We heard from a rider about his experience. “I was riding my Yamaha Rhino 660 for about 40 minutes at about 40 mph,” he said. Suddenly, the engine shut off without warning. Initially, I thought the problem was caused by piston slap. However, that wasn’t the reason. I changed the crankshaft and piston rod.”

Our hope is that this will fix his problem, but we are not 100% sure. You can follow his steps or take your Rhino to a mechanic if you are experiencing a similar issue.

Used or reconditioned Yamaha Rhino 660s are most likely to have idle problems. In terms of symptoms, the UTV will start and idle fine for a few minutes to a couple of hours.

After that, it will die suddenly, and restarting it will be more difficult.

Therefore, identifying the cause of this problem is challenging. It is possible to take the quad to a dealer, but there is no guarantee they will know the reason.

The only thing they can do is clean the carburetor or change the spark plug. A corrupt dealer may suggest replacing the fuel pump in order to earn extra money without fixing the problem.

According to users, the Rhino 660 is prone to sucking dust. We’re not sure if the Rhino 700 has the same problem as the 660. By easily penetrating the poor air filter, too much dust or sand can accumulate in the engine area.

Pistons, valves, cylinder walls, and other parts of the engine can be severely damaged as a result.

It probably won’t hurt to look down the throttle body and pull the filter. You should check the airbox regularly if you ride in dusty conditions.

Filter grease should be applied around the outer edges of the engine, then the filter should be carefully placed. As a result, dust and debris are more resistant to being blocked by the filter.

It is not a common problem. However, we decided to discuss it just to raise awareness. You may be more familiar with this problem as your Yamaha Rhino ages.

There may be a problem with the clutch after running for around 20 mph or so. It is possible for one of the clutches to tip over, causing extra weight inside the clutch.

There is an easy solution to this problem. Put some grease on the clutches after cleaning them. Then, secure them in the right positions.

Yamaha dealers may be aware of this problem. When they do, fixing it will be a piece of cake.

Some may consult the user manual to troubleshoot this issue. As the most common issue with 4WD, the manual suggests checking the servo motor first.

You will then be asked to check the relays next to the switches. Lastly, it will tell you to check the wiring.

You may need to pull back the wires if the insulation wires are broken.

When fixing this problem, you may also need other tools nearby.

You can get a clear explanation of the solution by watching the following video instead of reading about it.

Having learned the common problems with the Yamaha Rhino 660, you should know the ins and outs as well.

All reviews of the Yamaha Rhino 660 are positive after extensive research. It seems like almost no one dislikes this particular UTV. A user was unsure whether to choose an Arctic Cat or a Rhino. Another user suggested getting a Rhino. The answer he gave was like this:

Rhino is a leader in its class of sport and function. Others are following or just catching up. According to me, the cat rode like a Ranger and seemed kind of tankish all around.

A user owns both an Arctic Cat and a Yamaha Rhino 660. Occasionally, he rides both of his rides. After using both quads for several years, he prefers the Rhino over the Arctic Cat. According to him –

As I looked at them, the A-arms, tie rods, and axles all seemed smaller than the Rhinos. Additionally, they are wider (61 inches). The only negative I’ve heard about the Cat is that. “Where I ride, it’s just too wide for me.

In terms of negative reviews, one user found cracks in the frame. We couldn’t tell whether it was his fault or the vehicle’s, he just said –

There are cracks in the frame where the rear differential is mounted.

Users have reported that their Yamaha Rhino 660 is prone to sucking up dirt. Despite not liking it, he might go for the Rhino 700 –

In the 660s, dirt could pass through the filter and dust the engines. I’m not sure if that’s a problem in the 700s.

We will still say that the Yamaha Rhino 660 has one of the smoothest rides on the market, no matter how you judge it.

Either you use it for intense trails or you use it as a daily driving vehicle, it is the best of both worlds.

If you ask, “What about these issues?” They may not be apparent in your case. If you use your Rhino carefully, it may not cause any problems.

It’s a long-lasting UTV that offers both comfort and style.